it aint easy being green 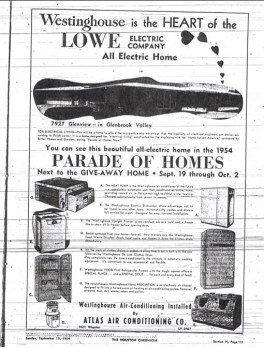 Behold, the all electric home of the future! A time when electricity was inexpensive and plentiful.

Fast forward to today. While electricity is still plentiful (for now) it sure isnt cheap. In the era of smart meters and programmable thermostats, there must be more we can do to monitor and cut down our energy usage. Right?

Enter the Black and Decker Energy Saver Series Power Monitor (insert trumpet sound here). This handy-dandy unit attaches to your power meter and transmits energy usage to the display unit wirelessly. According to Black and Decker’s marketing department we “..could save up to 20% per month!” I had visions of traipsing through the house turning lights off and on while announcing what our electric bill was at that moment.

Those visions were dashed as I attemped to install batteries in the transmitter that attaches to the power meter. B & D needed to do more R & D on the battery latch. The batteries went in, but the screw to hold the cover on was stripped and couldnt be tightened or removed. Great.

Even with a loose battery latch, the transmitter was still working. Now to attach it to the meter and see our kilowatts climb. No luck. The meter was too deep and the infrared port wouldnt line up with the transmitter.

Did I mention that it was like, a million degrees when we were outside futzing with this? Good thing I saved the receipt ’cause this bad boy was going back.

Still on a mission to be more like Kermit the Frog, I turned my eyes towards compact fluorescent lightbulbs (CFL).

One of the joys of living in a mid-century modern home is low voltage light switches. This means we cant dim any of our lights. Since you cant dim most CFL’s that objection was cleared. Next was the hideous color of light associated with CFL’s. Anyone of a certain age understands the importance of good lighting. Thats why we use GE Reveal lightbulbs.

As luck would have it, GE has launched a line of Reveal CFL’s. Whoo hoo! I can save electricity and the planet for the low, low price of $6.99 per bulb. What?!? Apparently being energy conscious and vain comes at a premium–and we needed 10 bulbs to “green” the kitchen and the den. But being on a mission (and having a few unused gift cards) we decided to pull the trigger.

Installing the bulbs was way easier than the Black and Decker thingamabob. We made our way though the den and kitchen feeling more and more like a tree hugging hippy with every change. Then came the moment of truth: The click of the light switch.

Initially, I wondered if we installed the brightest bulbs in the pack. I mean, they didnt arrive in a short bus or anything. As I pondered, the lights started getting brighter. Apparently they take a couple minutes to “warm up”–something the fine folks at GE left off the packaging. Not a deal breaker though. Each evening as I wait for the lights to warm up, I take a moment to feel warm and fuzzy that I am doing something to help lower our electricty costs.