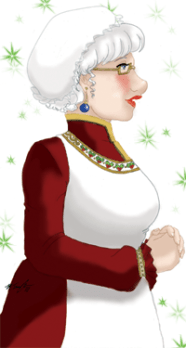 With thanks to author Ivy Davila

Although our modern Santa Claus had a long evolution from the 3rd century bishop, Saint Nicolas, to the secular, jolly old elf of the 21st century, Mrs. Santa Claus seems to have sprung to life unexpectedly. Not based on myth or tradition, she simply appears at Santa’s side in popular writings by American authors in the mid-1800s.

Although our modern Santa Claus had a long evolution from the 3rd century bishop, Saint Nicolas, to the secular, jolly old elf of the 21st century, Mrs. Santa Claus seems to have sprung to life unexpectedly. Not based on myth or tradition, she simply appears at Santa’s side in popular writings by American authors in the mid-1800s.

The first mention of a Mrs. Santa Claus occurs in the writings of James Rees in 1849. Although his story features a couple disguised as an old man and his wife delivering wonderful gifts on Christmas Eve, the story ends with the characters not being Mr. and Mrs. Claus after all. But the idea is planted and soon begins to grow.

Over the next few decades Mrs. Claus is presented in stories as the supportive wife, handling the list of who’s been naughty or nice, or keeping Santa and his elves well fed. It wasn’t until 1889 that Mrs. Claus takes on a bit of personality of her own in the poem “Goody Santa Claus on a Sleigh Ride.” The endearing Mrs. Claus convinces Santa to take her with him on Christmas Eve. She tends the reindeer, but sadly, doesn’t get to deliver any toys! Always the helper, she mends a stocking for a poor little boy so Santa can fill it with presents.

For years, she continued to be portrayed as merely a background character, there to support Santa Claus in his exhaustive work. Mrs. Claus is often shown as a rotund, gray-haired, kindly woman, willing to selflessly help Santa and his elves in their workshop at the North Pole, feeding them her delicious meals, and making sure they are safely prepared for their long journey. Although this is the most common portrayal of Mrs. Claus, more recent stories and movies have featured Mrs. Claus in a variety of roles, showing her to be a resourceful and energetic woman who could almost handle Christmas Eve on her own!

Today, Mrs. Claus has a wide choice of stylish or traditional outfits to wear on Christmas Eve. Whether you are seeking a classic, warm-hearted Mrs. Claus costume, looking like she just stepped out of the North Pole kitchen, or a modern Ms. Claus who is ready to knock old Santa’s socks off when he returns from his journey, there is a costume available for every taste. She can be naughty or nice!

From the grandmotherly companion making sure that Santa wears his winter scarf to the vixen who first made Santa fall in love, Frankel’s Costume has the perfect Mrs. Santa Claus costume for your spectacular Christmas Eve. Bring Mrs. Claus to life!  Have her deliver the presents at the office party or your club’s Christmas celebration. Thrill the children early on Christmas Eve with a classic Mrs. Claus outfit, then delight Mr. Claus later by slipping into one of our sensational Mrs. Claus outfits, unheard of fashions when she first met Santa in the 1800s!

Be sure to check out our full line of Mrs. Santa Claus costumes. Dressed in the daring Sleigh Bellecostume, you’ll be the star of the office party or the temptation that keeps Mr. Claus at home for the evening. In the  Mrs. Claus costume, you’ll look like you just arrived from the North Pole with a tray of cookies hot from the oven. Christmas Gift has you ready to be unwrapped for a delightful Christmas Eve surprise!