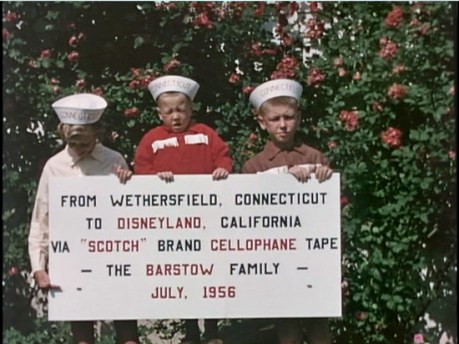 In July 1956, the five-member Barstow family of Wethersfield, Connecticut, won a free trip to newly-opened Disneyland in Anaheim, California, in a nationwide contest. This snippet from the amateur documentary film tells the fabulous story of their fun-filled, dream-come-true, family travel adventure, filmed on the scene at Walt Disney’s “Magic Kingdom” by Robbins Barstow.

The full, 30 minute documentary can be seen here.

Sadly, Robbins Barstow passed away on 10/07/2010. His tribute in the New York Times can be read here.

A future celebrity was also captured in this home movie. Don’t know who it is? Click here to find out.