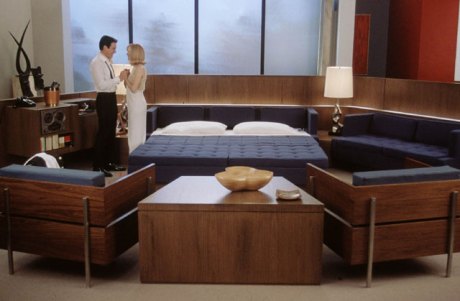 Stranded at the drive-in. Branded a fool. What will they say Monday at school?

Ahh, the days of youth and cooler climates. As a kid growing up in Wisconsin, after milking cows and making cheese, our parents would occasionally treat us to a movie at the drive-in. It was fun to load up the car with lawn chairs, blankets, bug repellant and snacks and see a double feature. The first movie was usually something rated G while the second movie was PG or R–since the kids would probably be asleep by the time it started.

The countdown clips were played to remind you of how much time you had to get popcorn, hot dogs and Pepsi (yes, Pepsi–also known as pop). Everyone would flash their headlights, honk their horns, and holler when the hot dog jumped into the bun. It wasn’t until years later, when I could drive to the drive-in, that I understood the significance……

Down With Love was the 2003 movie that rekindled my love for all things mid-mod. I wont bore you with a synopsis, review, or even comments on Renee Zellweger’s pout. But I would like to point out that meticulous detail was paid to the costumes, cinematography and visual effects. For example, the New york skyline of 1962 was digitally recreated for backdrops and restored street footage from the 50’s and 60’s was used in rear projection shots. Did I mention that the soundtrack rocks? Lots of fun awaits you in this underrated gem. So without further adieu, I present the trailer for Down With Love.